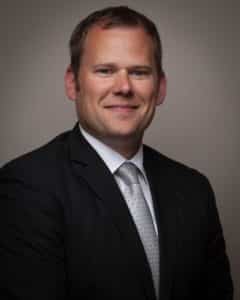 Mr. Groat is a native of Petoskey, Michigan and is a 1996 graduate of Petoskey High School. He obtained a Bachelor of Science degree from Central Michigan University in Mt. Pleasant, Michigan in 2000, where he majored in Political Science also received minors in Business Law and Regulations and well as Economics. Mr. Groat graduated with a law degree (Juris Doctor) from Michigan State University College of Law in East Lansing, Michigan in 2003.

During law school, Mr. Groat spent one summer as an intern at the Charlevoix County Prosecutor’s Office, where he gained litigation experience by personally prosecuting cases and assisting in the prosecution of cases. Mr. Groat also completed an internship with Legal Services of South Central Michigan, where he was assigned to the Domestic Violence Unit.

Mr. Groat was admitted to the State Bar of Michigan in 2003. Since that time, he has practiced law in Michigan, handling cases throughout the state. Mr. Groat concentrates his practice in the area of family law (specifically in the areas of divorce, custody and child support as well as litigating personal protection order matters). He is a well-known litigator and has taken numerous divorce and custody cases to trial with favorable results for his clients. He is also a certified Collaborative Divorce Attorney and has handled numerous Collaborative divorces in Michigan. Mr. Groat also has extensive experience in handling personal injury and dog bite cases, as well as criminal defense.