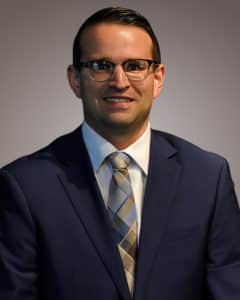 Kyle J. Ortiz is a native of northern Michigan and is a 2009 graduate of Inland Lakes High School. He earned his Bachelor of Arts degree majoring in both political science and philosophy with a minor in psychology from the University of Detroit Mercy. Mr. Ortiz earned his law degree from the Michigan State University College of Law graduating summa cum laude. During law school, Mr. Ortiz was a three-year trustee scholarship recipient, was a member of the Michigan State Law Review, and represented investors in the Securities Law Clinic. Mr. Ortiz also has experience as a judicial extern for the Honorable Daniel S. Opperman, Chief Judge of the United States Bankruptcy Court for the Eastern District of Michigan. He was admitted to the State Bar of Nevada in 2016 and the State Bar of Michigan in 2022.

Prior to relocating back home to northern Michigan, Mr. Ortiz practiced law in Las Vegas, Nevada. Mr. Ortiz has extensive experience representing individuals, businesses, creditors, and bankruptcy trustees in both state and federal courts. Mr. Ortiz’s representation has resulted in the recovery of millions of dollars for his clients. Mr. Ortiz is a fierce advocate for all his clients who benefit from his skill in both crafting and arguing matters before the courts. Mr. Ortiz is excited to be joining the team at Harris Law, P.C. and to be serving the community where he grew up. His practice specializes in the areas of family law, debtor and creditor representation in both state and federal courts, and general civil litigation.