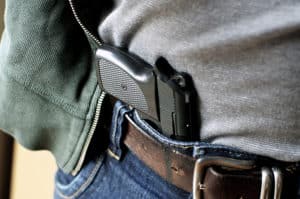 Under the new law signed by Governor Rick Snyder, gun boards will no longer be involved in the process of obtaining a concealed carry permit. The new law is part of an effort to speed up the process and make it easier for those applying. The three member boards made up of prosecutors and county sheriffs will no longer be involved or hold face-to-face interviews with applicants. The National Rifle Association noted that face-to-face interviews and allowing a gun board to deny or revoke a license were a violation of a person’s constitutional rights. The new law will require State Police to do background checks on applicants to make sure there are no histories of criminal charges or mental illness in the national database. The city clerk’s offices will then issue the permits to those who qualify.

Opponents of the new law are concerned that eliminating the gun board interview will remove an important step in the process, putting our communities at risk. Kristen Moore, with the Moms Demand Action for Gun Sense in America stated, “This dangerous legislation would put Michigan women and communities at risk,” and “The presence of a firearm in a domestic violence situation makes it five times more likely that the woman will be killed.” The new law, however, does restrict a person with a personal protection order against them, from getting a license. It also allows immediate temporary licenses to be issued to someone who has filed a PPO against another person in an effort to protect their right of self-defense.

Other changes in the law involve dropping the price from $105 to $100 for initial permits and increase renewals from $105 to $115. The process time has been reduced to 45 days, where the old system took upwards of 8 weeks. Applicants who don’t receive their license within the 45 day period can use their receipt at the county clerk’s office and have their license issued immediately. Applicants will still be required to complete an 8 hour training course by a licensed instructor.

The new laws makes Michigan a “shall issue” state allowing anyone 21 or older to be issued a CPL as long as background checks are clear and the required training is completed.

Governor Snyder had vetoed two previous bills which would have allowed guns in “carry free” places like schools and parks as long as advanced training courses were completed. Also excluded from the new law is a provision that would have made it easier for those with a personal protection order to obtain a permit.

Gun ownership is on the rise in Michigan increasing from 100,000 to 500,000 active concealed permits in a few shorts years. Advocates applaud the governor for signing the law which streamlines a once lengthy process.